The Benefits of Kubernetes for Integration D...

Why You Should Build Your iPaaS in Apache Ca...

Gain Control Over Your iPaaS with Open Sourc...

What Is Apache Camel? A Primer for Developers

Any developer looking to build an integration project has likely heard of Apache Camel by now. When you're considering frameworks to build your integrations on, Camel likely reaches your shortlist — especially if you're in the market for an open source solution.

Open source integration frameworks provide the same capabilities as any other framework. The difference (on a foundational level, anyway) is that an open source framework provides a heavy set of features for a fraction — or none — of the cost. They also foster user communities that continuously work to improve the technology long after it's first introduced. Camel is no different: it delivers the fundamentals of software integration, introduces a ton of incredible components that go beyond those basics, and serves a dedicated group of developers who are helping it grow.

But what is Apache Camel, and is it the integration framework for you? Let's take a tour through Camel's history, key features, and how it can solve your integration woes.

The History of Apache Camel

First, we'll discuss the story of Apache Camel and the basics of the framework. Camel is an open source integration framework based in Java first released in 2007. Created by James Strachan, former Camel lead architect and now a software engineer for Apple, it was designed to be a lightweight, easy-to-operate integration system.

Strachan based Camel on the established and emerging patterns from Gregor Hohpe and Bobby Woolf's seminal integration book Enterprise Integration Patterns. Camel is designed as a simple, easy-to-use implementation of over 60 patterns outlined by Hohpe and Woolf. Everything from message channels, construction, routing, transformation, and endpoint management is possible through Camel, all through its powerful Java-based language. 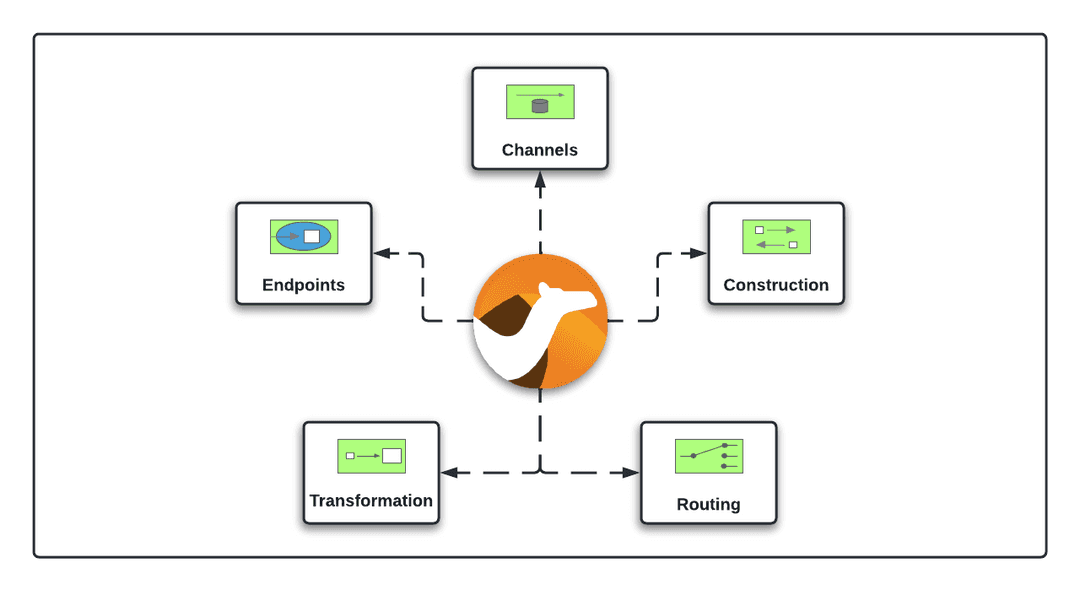 Apache Camel 1.0 launched in June 2007 with 12 separate components, five of which made up part of Camel's core library. Today, the software features more than 25 core components with 300+ non-core components bringing in new native capabilities and integrations with other software. Camel has been gaining recognition both in the Apache community and the integration community at large. In 2019, Camel was Apache's top project by commits.

Now that we know how it came to be, what makes Apache Camel stand out compared to other frameworks?

Camel at a Glance: The Key Features

Apache Camel comes equipped with a ton of capabilities that will appeal to anyone looking for a powerful integration tool. You can deploy it as a standalone build or as a library in Kubernetes, Kafka, Quarkus, application servers, the cloud, and more. Anywhere you can run containers, you can run Camel.

While Camel is built in Java and supports the Java DSL, you can create routes in a number of different languages. This includes the Java, XML, Spring XML, YAML, and REST DSLs.

Currently, Camel supports over 40 data formats, including XML, CSV, JSON, YAML, CBOR, RSS, and Avro. Standard data formats for finance, telecommunication, healthcare, and other industries are also supported. With Camel, your company can leverage a powerful integration solution no matter what your data looks like.

When working with Camel, you have a number of means to test your integrations and deployments. Within the system, you can run testing components via Java, Spring, and CDI. It also supports the Citrus integration framework if you want a third-party testing solution. In addition, Camel includes components for testing endpoints, already-exisiting routes, and non-physical routes.

Now let's break down what Apache Camel looks like under the hood. The core of Camel's architecture is the CamelContext runtime which consists of both the routing engine (which connects endpoints to the integration platform) and the processers (which handles tasks like routing, transformation, validation, etc.). We'll just provide a high-level overview of the architecture in this article; you can see more specific details on Camel's architecture here. 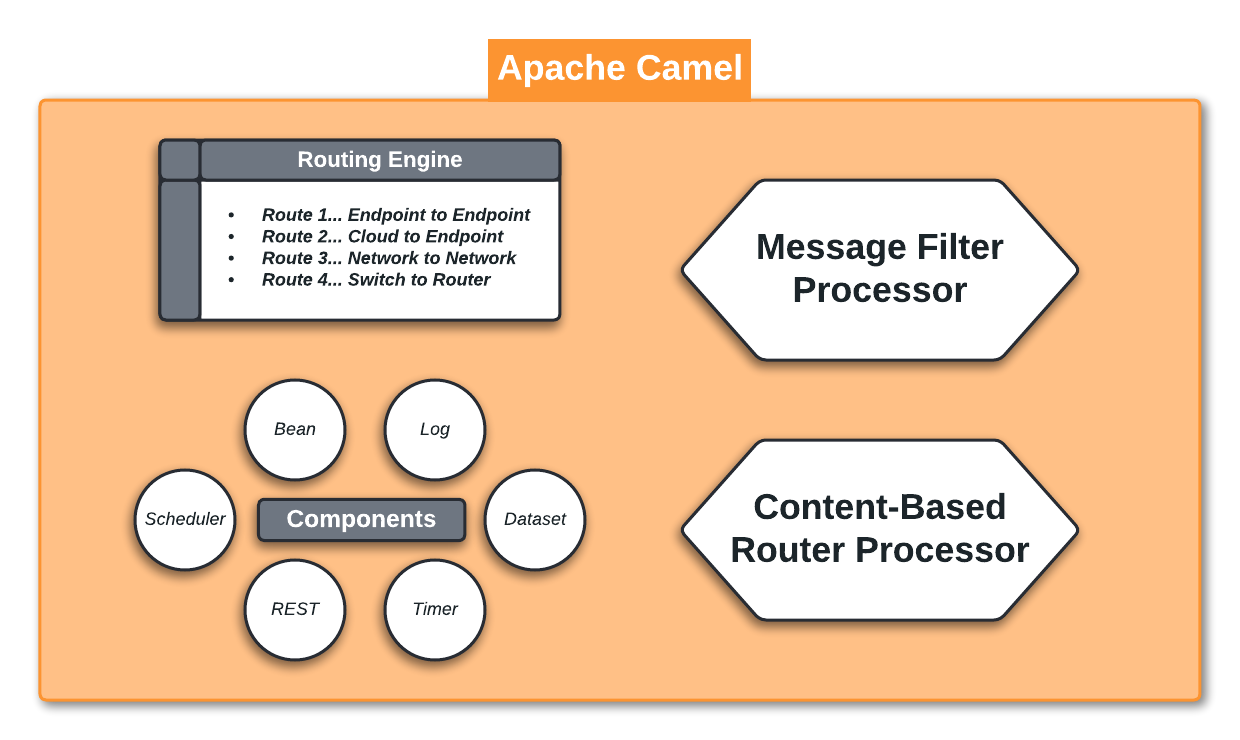 The routing engine is where your DSL connects endpoints together to establish routes for your messages. Camel operates on a messaging system where your data takes the form of a message delivered by a sender, then collected and interpreted by a receiver. Messages include a header (for identifying senders, encoding, etc.), attachments (optional, for mail and web service components), and a body (for defining content).

The processers are where Camel handles tasks like routing, transformation, and validation. They're also where the enterprise integration patterns are applied.

The other side of the Camel architecture are the components, which attach to the CamelContext runtime and allow developers to connect Camel routes to external systems. Supported components include services for HTTP, FTP, JMS, DNS, GraphQL, IRC, Amazon Web Services, Jetty, and ActiveMQ. You can view a full list of the current included components in Apache's documentation here.

Why Apache Camel Is the Integration Framework for You

So now that we know what Apache Camel looks like, why should you consider it for your integration project?

The simple answer is that Camel is a mature open source platform that gives your developers control over integrations. No matter where your data is stored or what applications you need to connect, Camel has you covered. With its automatic testing systems, you can easily run and debug your integrations as you're building them — ensuring your projects are good to go at every step of the process.

Camel delivers a production-ready integration technology that is equipped to handle whatever you can throw at it. It's especially ideal for integrators looking to connect a number of different sources to each other thanks to its universal design. Every integration created with Camel uses the same concepts and building blocks at its foundation, regardless of the underlying language or protocols. Connecting all your apps and systems together is simple, even when you're dealing with a large number of integrations.

And the kicker is: you're gaining access to all of this alongside a community that's dedicated to improving and supporting the software. Apache Camel committers and subprojects help uncover areas where Camel is lacking. In addition to Apache's own mailing list and Zulip chat, Camel's open source code allows developers to address problems, fix bugs, or contribute their own projects.

To learn more about Apache Camel and dive deeper on its components and features, you can check out the official Camel documentation.

The Benefits of Kubernetes for Integration Developers